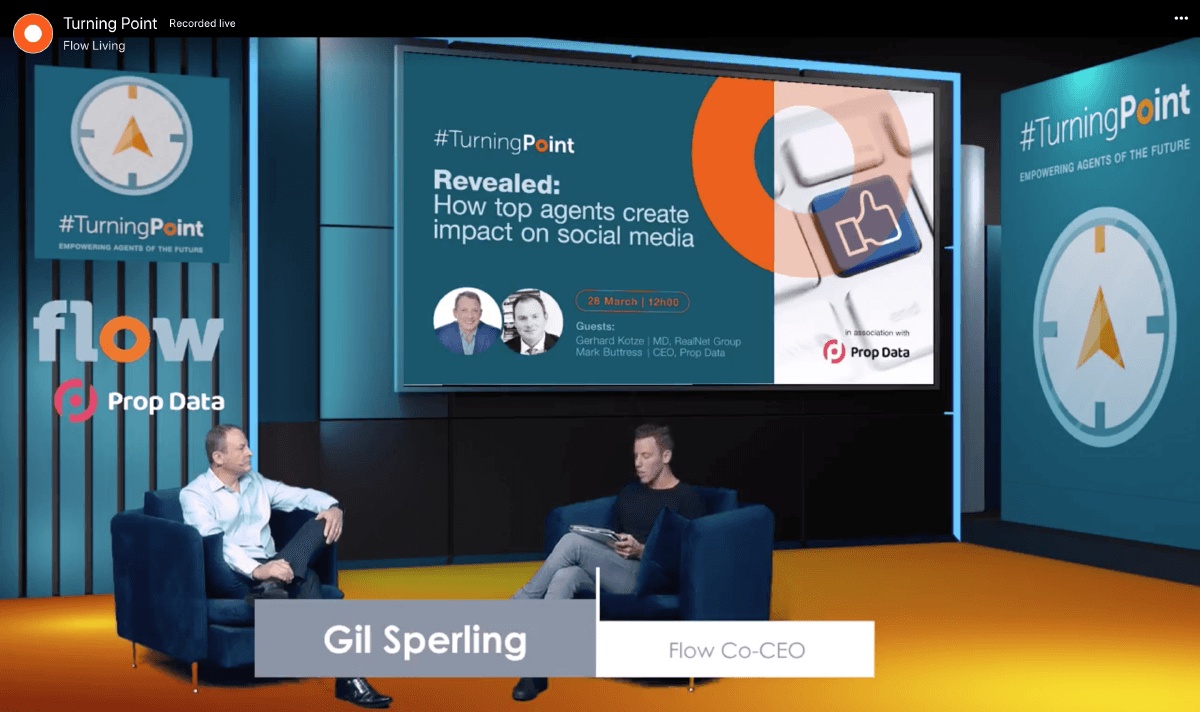 In the modern marketing mix, social media and digital marketing are the thread that ties together the various channels in play – and it’s also the most targeted and cost-effective aspect, according to Flow Co-CEO & Co-Founder, Gil Sperling. RealNet Group MD Gerhard Kotze said that one channel will never replace the other in the property business, but that social media allows agents to target their audiences and reach them where they’re spending their time – online.

“Social media advertising isn’t intrusive – people see ads because they’re looking for properties in a certain area, in a particular price range, so they’re served listings that meet those requirements,” he says. “It’s about reach, repetition and finding the sweet spot at the right budget – and having a partner like Flow that automates that process so agents can focus on selling properties makes it hugely accessible”.

“The huge reductions in traditional marketing overheads offered by social media advertising opens the door for agents and professionals in the property industry to leverage the massive social media audience, creating ads and building brands with the click of a button,” says Prop Data CEO, Mark Buttress. “It’s revolutionised the way we get our information in front of our audiences”. He says that social media is an essential part of the mix that leads prospects through the sales funnel. “From audience building at the top, through nurturing them and moving them down towards looking to transact, bringing all sorts of channels into that consideration mix should be a focus point for every agent. Integrating Prop Data’s information and Flow’s stack of services has alleviated many of the pressure points for agents, slashing overheads and helping them get exposure to the right people on the right social media channels,” says Buttress. “Building an audience through interaction with social media advertising helps agents leverage the other channels, which they can then cleverly employ to re-engage the audience they’ve built, in different parts of the funnel”.

The metrics and insights offered by social media platforms are key to understanding how your audience is consuming content. “Staying top of mind as the go-to area expert is essential for every agent, so the combination of outdoor and digital works well. Digital allows you to target people by demographics and geography and offer them dynamic content, giving agents ultimate control and unmatched targeting of prospects,” says Sperling.

'Doing’ social media is more than posting to your page

Many agents think that having their own Facebook page and posting to it regularly means they’re ‘doing’ social media as a channel – but Sperling says that the reach of organic posts is so limited by Facebook’s algorithm that only 5-6% of people who follow that page will see them. “With paid social media, you have access to the 26 million people in South Africa who use Facebook for upwards of four hours each day – and have the chance to target those who are looking for the kinds of properties that you have in your inventory,” he says. “When you do paid media, you have the capability to target people at the right time with content that’s relevant to them – so you’re not a nuisance spamming their timeline. They chose to engage on social media, so they’re seeing content they expect to see – so they’re primed to engage with you and your brand. Why would you settle for reaching 50 of the 1 000 followers on your page with organic posts, when you can exponentially increase your reach to millions of keen buyers with an automated, cost-effective solution like Flow?”

Take buyers on a journey

Kotze says that going on a journey with prospective buyers is important. “On a broad scale, we need to get more people into the top of the funnel and then use Flow’s automation to segment them, serving them dynamic listings,” he says. One of the most important engagement drivers has proven to be photographs of properties, so the RealNet team prioritises quality images to help create eye-catching ads. “We also have an entire in-house design team, but being able to build, brand, customise and change listings ads with Flow, with a few clicks, has really alleviated the pressure on that team,” he says. “The way people are engaging with video online also shows us that it has a key role to play in the future success of the real estate industry. The better the content you create, the better the engagement will be – if you’ve invested your money right in the kinds of platforms that will give you information about how you’re reaching people and what they respond to. There’s no intelligence behind a static billboard, while social media gives us loads of information”.

Flow’s most recent innovation, ‘Self-Serve’, puts full control of ads in the hands of individual agents, producing effective social media advertising with a few clicks. ”Creative ads are a major drawcard for agents, but so few have the time and resources to focus on that,” says Sperling. “Social media is a visual medium and if the ad isn’t appealing, the viewer won’t be drawn to it, no matter how perfect the property may be for them”. Flow’s Self-Serve delivers effective ad designs, using the agency’s Corporate Identity and images, with a series of best-practise templates, with a few clicks. Kotze says this is a boon to both large and small agencies. “It takes the guesswork out of building an online presence, allowing the agent to focus on their job of shifting stock without testing the waters with different styles or formats of ads, helping them be leaders in their area, even quicker,” he says.

In terms of trends for the future, Prop Data’s Buttress says that the company’s focus has always been on education, connecting people within the industry and keeping them posted on best practise. “We’ve been telling them to be aware of proptech and digital, and they’re starting to understand the benefits,” he says. “We have a few updates coming up around a new management system which we’ll be launching in the next few months which will allow for the visualisation of feedback data to give agents at all levels the chance to understand and appreciate the benefits of social media advertising and exposure. The more we talk about new ideas and proptech ecosystems, the more the industry is going to grab hold of it. The sooner agencies realise that they’re now dealing with digitally-savvy consumers who know how to find what they want, when they want it online, the sooner they’ll embrace the digital world and present their brands on an ongoing basis in the right places at the right times”.